Domestic Workers among hardest hit by Covid-19 pandemic in Tanzania

Three years ago Janet Michael’s life changed for the better when she was offered a job as a domestic servant in Dar es Salaam, about 1,365km from her home in Bukoba located on the north-western part of the Lake Victoria shores.

Janet was extremely lucky to get a job where she was earning TSh50, 000/- (US$21.57) to support her two children and aging parents. Janet even started saving some money to put up her own house.

All these plans have come to nought since the Covid-19 pandemic. For starters, her employer who lived in the Tabata suburbs of Dar es Salaam was among who have lost their jobs due to the pandemic.

“I could not believe it when she gave me a cheque of TSh50, 000/- and told me that was the last monthly salary l would receive. She told me she would henceforth reduce my salary to TSh30, 000. When l protested, she told me I could leave the job,” recounts Janet.

Faced with the option of being unemployed and without any support for her two children, Janet worked for a few months and struggled to stretch the TSh30, 000/- to cover as much of her family’s needs as she could. Six months later, Janet was lucky to get another job where her new employer promised to pay her Tsh 60,000/- per month.

For Janet, the new job came with new challenges. While she previously worked in a small household, her new job entailed looking after a family of six including 4 children. Working from the break of dawn until late into the night, Janet eventually fell sick and at the hospital, she was told she was suffering from exhaustion and fatigue and was advised to rest, something she could not do as she risked losing her job!

Janet is among 1,087,401 domestic workers in Tanzania constituting five percent of the working population who are juggling increased challenges caused by the COVID-19 pandemic. Majority of the domestic workers are women whose hours and wages were reduced during the lockdown period and have not been reinstated after these initial measures were eased. 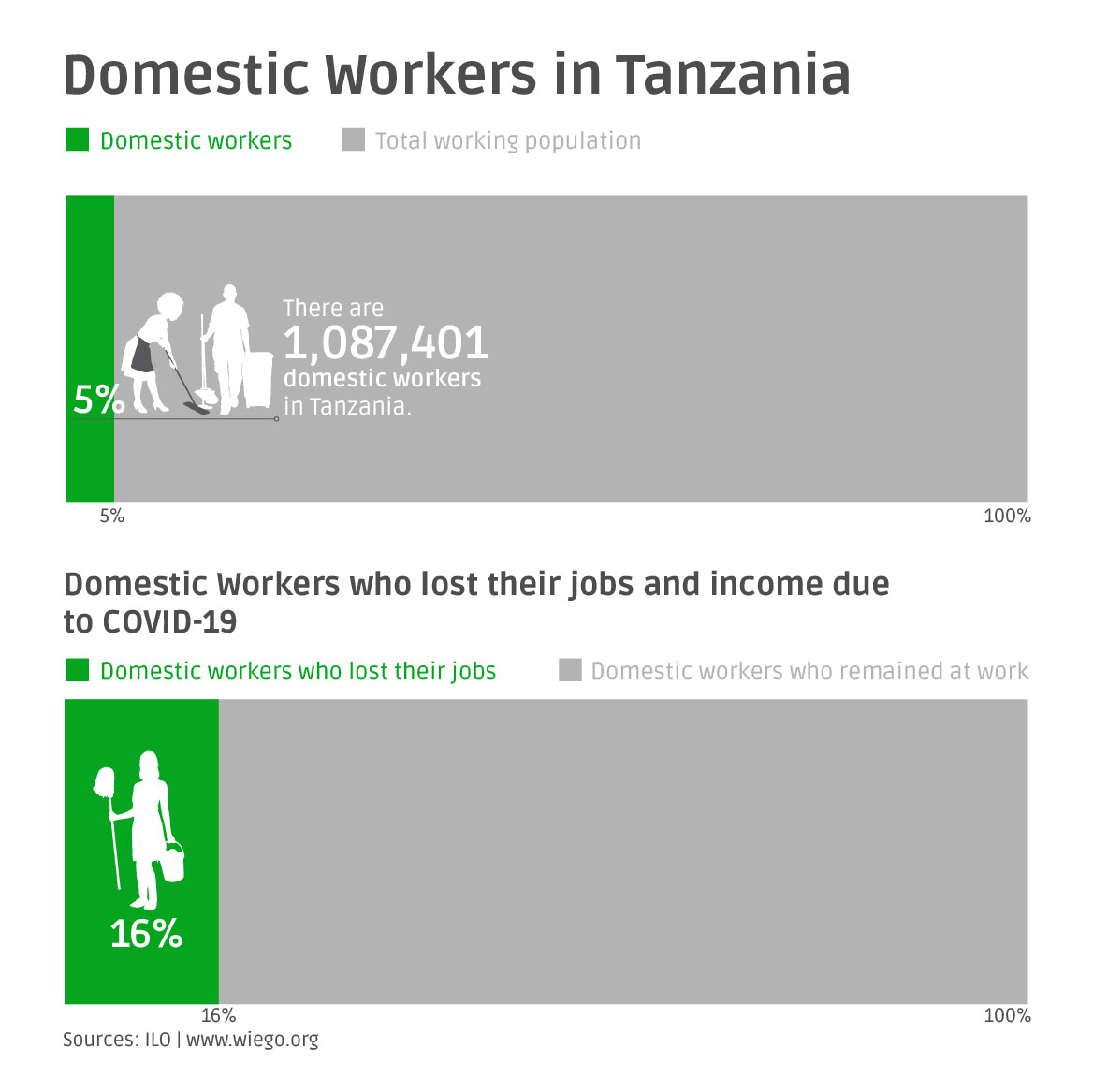 A survey of domestic workers in 14 African countries conducted by the International Federation of Domestic Workers indicated that 85 percent of domestic workers who were laid off, received no severance pay. Those who retained their jobs have had a reduction in their income which has had a dramatic impact on their households. Rising food and fuel prices amidst widespread price speculation has made the situation worse.

Due to the intimate nature of domestic work, Janet and others like her are at high risk of contracting the disease from the household they work in. They are especially at risk as they are expected to continue working even in a situation the employer or the family contracts the virus. Without personal protective equipment, domestic workers like Janet have no option but to take whatever precautions they can such as buying their own masks.

Like many of her colleagues, Janet’s salary was docked for the two days she was unwell. According to the survey, 53% of domestic workers do not have access to paid sick days which increases the risk of infection and undermines their ability to take care of themselves and their families. The stressful nature of the work means that many of the workers may also have pre-existing conditions such as high blood pressure, respiratory diseases and even diabetes which makes them vulnerable to contracting the virus. The risk of succumbing to the virus is further exacerbated by the deterioration of health care services and access to medication. 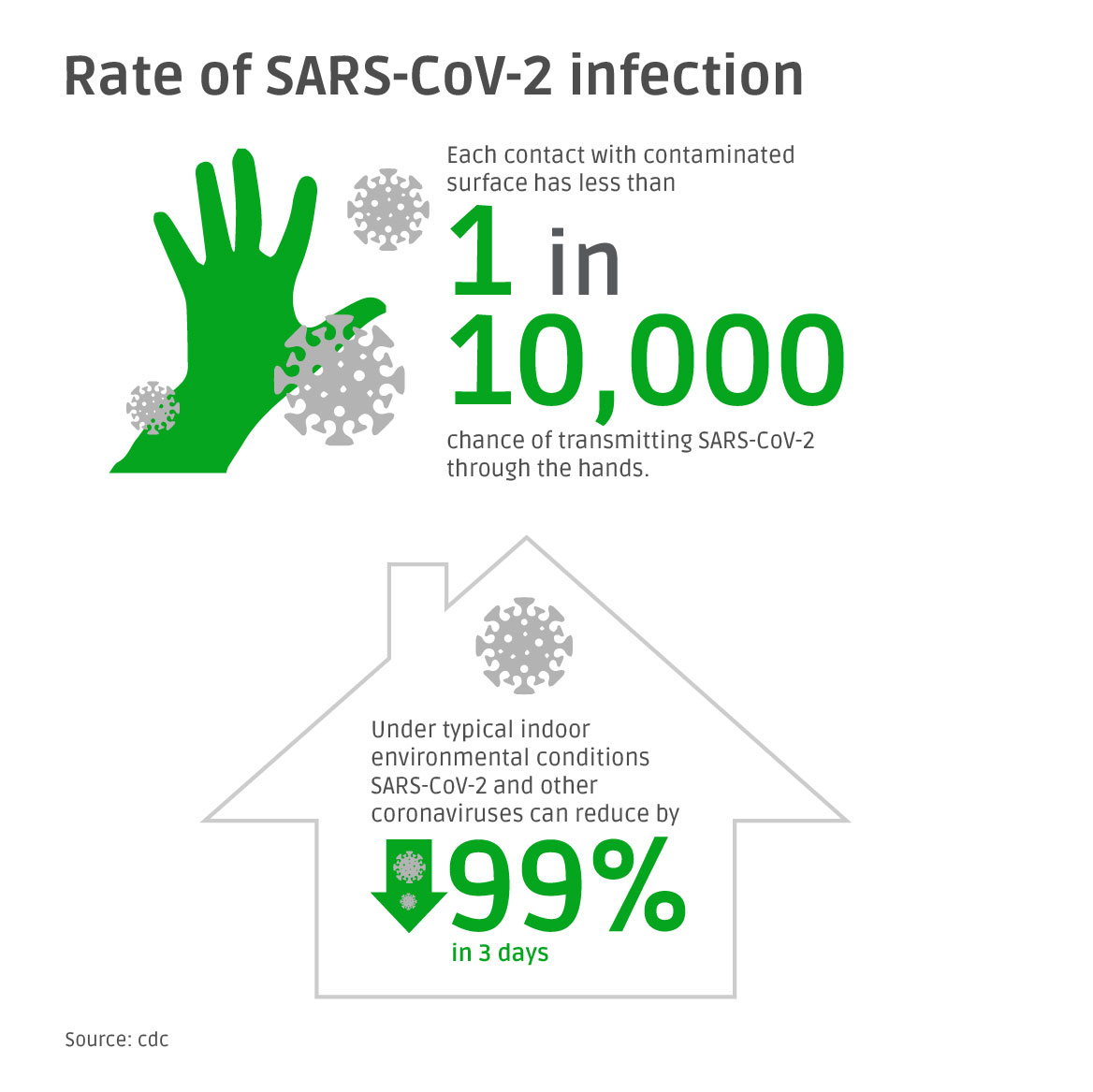 This is what happened to 18 year old Mary Michael, a domestic worker from Masaki suburb in the country’s commercial capital. When Mary contracted the virus, her employer sent her back to the Quiz Cup Center—the NGO which provides training and placements for domestic workers.

“My boss also had similar symptoms. When he took me to hospital, l was tested for COVID-19 and given some medicines. I returned the next day and was told I had the virus. The employer sent me back to the agency. I felt so bad, I thought maybe they sent me back because they think I was the one who gave the disease to them,” Mary says.

Jenifer Mwavula, a domestic worker lost her job when she sneezed in front of her employer. We found Jenifer at Precious Daywaka, a Dar-es-Salaam-based domestic worker employment agency where she had gone looking for another placement.

An employment placement agent, Eliwanjela James said she had received numerous complaints from domestic workers who have faced increased harassment, have been overworked, have been sacked or have had their rights infringed upon by employers who are afraid of contracting the virus from these workers.

“I was not able to visit my family as l was not allowed to leave by my employer who was afraid that if l travelled to see my children l would come back with the virus. With the little money that they were paying me, my children are not able to get enough food.During COVID 19, we were locked in, no visiting families, so it was impossible to borrow food from your family because of hunger. From this period of COVID-19, I learned that even your immediate family could not support you when you have a problem because everybody was just looking after themselves.”

She said the demand for workers had dropped drastically since the pandemic started from the pre-pandemic 25 job placements monthly to less than seven placements since March last year. “We have had no alternative but to release the girls to return to their homes, many of them from the rural areas, as we are not able to get those jobs,” he said. 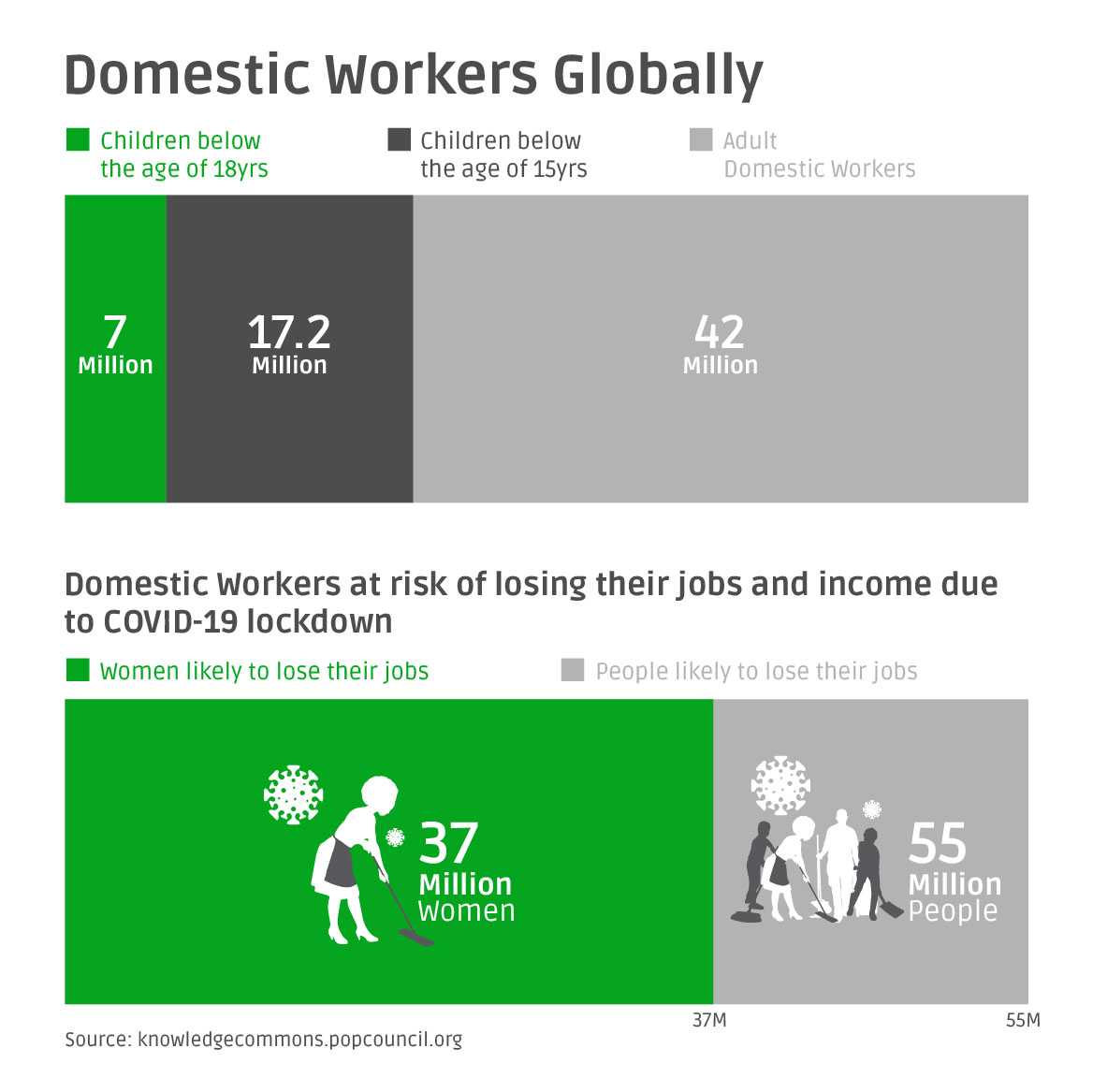 Margaret Tibaijuka, the Manager of Precious Daywaka said her agency has been educating the domestic workers on the virus and how to protect themselves such as using bleach to clean surfaces, wearing gloves, masks and eye protection if caring for those infected, personal hygiene and observing the other basic safety measures.

An employer, Veneranda Chisel said even though she wanted to provide the necessary support for her domestic worker, she did not have the money to provide the protective clothing and other necessary equipment. “I have been out of employment for more than a year and at one point l had to sack my domestic worker as I did not have the money to pay her,” Veneranda says.

Unlike other countries that instituted social protection measures to help vulnerable communities such as the unemployed meet the challenges presented by the pandemic, there were no substantive measures that the government instituted or implemented. According to the survey, only 30% of domestic workers contribute to social insurance which however do not include support such as unemployment benefits.

While other countries introduced income support measures, these were targeted at those in formal employment and ignored the majority of those in the informal sector which includes domestic workers.

The director of Children Affairs in the Ministry of Health, Community Development, Gender, Elderly and Children, Sebastian Kitiku conceded that there has been little that the government has done to support domestic workers or those in the informal sector. He said his department has not received any requests for assistance even though he conceded that there is need for such assistance in the community.

On the harassment, infringement of rights and other challenges faced by domestic workers, Kitiku said more awareness and information on where to report incidents was a priority.

An official of Conservation, Hotels, Domestic and Allied Workers Union (CHODAWU) in Ilala and Temeke Districts, Wagala Chunga said the union had been educating its members on occupational health and safety standards, their rights and employer responsibilities.She said even though the rights of domestic workers are clearly protected in the constitution, there was urgent need for the government to ratify the Domestic Workers' Convention Na 189 of 2011, adopted by the International Labor Organization (ILO).

She however said that although the rights of domestic workers are clearly protected in the constitution, there should be clear-cut registration for this group of workers. “Lumping domestic workers with other workers is unfair because of the nature of their work, the working hours, social protection and environment. For example, many of them live and sleep in their workplaces, those who return home at night receive an extremely low wage ranging between Tsh 30,000 and TSh150,000,” Chunga says.

What is Workers' Convention 189?

Under the Convention, domestic workers are entitled to the same basic rights as those available to other workers in their country, including weekly days off, limits to hours of work, minimum wage coverage, over- time compensation, social security, and clear information on the terms and conditions of employment. The new standards oblige governments that ratify to protect domestic workers from violence and abuse, to regulate private employment agencies that recruit and employ domestic workers, and to prevent child labor in domestic work.

Important to the economy

The ILO estimates that there 67 million domestic workers over the age of 15 worldwide, 80% of which are women. About 17% of domestic workers are migrant workers. In many developing countries, it is due to the labour of domestic workers that other women have succeeded in entering the paid labour market in increasingly larger proportions and in breaking the glass ceiling.

This is because when women engage in paid work outside the home, they either have to reduce their rest and leisure time, enlist the help of partners or other family members or – if the family or woman can afford it – pay someone else to do the care work that they would normally do. This makes the domestic workers’ contribution to economic growth substantial, enabling an increase in dual-income families.

"Those in formal employment and in the offices are able to work hard because they know they have left people that they trust at home, who are raising their children, cooking food and taking care of their homes. How could anyone ignore the work of the domestic workers when you talk of developing the country's economy?” she said.

The ratification of Convention 189 would improve the plight of domestic workers. For now, governments should include this cadre of workers in any social protection programs that they have initiated or will initiate to help vulnerable groups deal with the challenges presented by COVID-19.

This article was produced with support from the Africa Women’s Journalism Project (AWJP) in partnership with The ONE Campaign and the International Center for Journalists (ICFJ).”